New Zealand's "No 8 wire approach" to problem solving is alive and well in the deep south, and is attracting attention worldwide. Dunedin engineer Barry Armour came up with a solution to a problem encountered every day by transport companies, tradesman, and "DIY'ers" throughout the world.

Millions of ratchet tie downs are sold each year. But the age old problem has been the time taken to thread the strap through the ratchet when loading and unloading. Armour came up with the answer, a Side Loading ratchet which allows the strap to be loaded into the side of the ratchet (rather than being threaded through).

The new ratchet has come a long way in the 3 and a half years since Armour came up with the original concept. "We are about to launch the 50mm ratchet in New Zealand and Australia, though word got out that we had a container of the new product arrive and our first order was for a pallet! What a great start!" Armour said. One of those who has eagerly followed the ratchets development is truck driver Doug Ironmonger, who regularly calls on Armour's engineering firm to transport metal products to and from Christchurch for specialty galvanizing. When the first container arrived he pounced on the opportunity to buy some of the new ratchets for the business. "They're great – a real game changer for me that save me heaps of time everyday" Doug said. "I'm always tying and untying loads as I pick up and drop off customers orders up and down the island. Depending on my load, some days I reckon I save up to 2 hours in loading and unloading time. I've been using them for a couple of months now and love them, I can't see myself going back to standard ratchets" commented Doug. The news keeps getting better for the Dunedin company. Together with his business partner David McKewen, they negotiated a sales and marketing license for the North American retail sector which was signed last year. This has resulted in two of America's biggest retail chains agreeing to stock the new ratchet in over 350 stores beginning in April. A number of other chains are now showing interest in selling the new ratchet. "The upfront license fee also provided valuable working capital to continue with the new ratchets commercialisation plan." McKewen said. The interest is equally as positive in the North American commercial sector with discussions underway with a number of American companies interested in licensing or distribution rights. The company attended an industry convention in Las Vegas in February this year and was overwhelmed by the positive feedback and support. A German partner also has field trials underway in Europe.

On the back of their early success, the company had the confidence to last month file National patent applications in 17 countries, plus an additional 37 countries covered under the European Patent Office. An earlier PCT application was published in very quick time highlighting the novelty of the invention and strength of their patent. "Such an extensive patenting programme for a small company was only possible as a result of the company discovering and using the technology based patent fling company Inovia" said McKewen. "By using Inovia's innovative software platform backed up by a network of patent attorneys in market, we were able to cut our bill by under half of what it would have faced using the traditional patent firms." He said. McKewen also commented that without qualifying for any form of government assistance for the new despite its international potential, the reduction in patent filing costs was a huge help. "It meant we were able to get protection in more countries than we had originally planned whilst at the same time keeping some money aside for continuing market development" he said.

The early success has also provided the company with confidence to invest in the tooling required for commercial production of the 32mm Armour ratchet. Armour describes the new size as "a great little ratchet designed to meet the needs of tradesman and DIY'ers, with a breaking strength of 2 tonne!" "I think this confirms our earlier feelings that the opportunity for this new product could be huge – there are millions and millions of ratchets sold each year throughout the world. Ratchet tie downs are not only used 24/7 in the transport industry, but every household that has a trailer or roof rack is bound to have a ratchet tie down used to secure loads."Armour commented.

A new website has been set up (www.ratchet.co.nz) and an animation on the home page developed by local web designer ZeDDD has drawn a lot of talk and attention. McKewen commented "it's a simple animation with a cycle of only about 12 seconds and it runs continuously, but you only have to show people the animation and they get it straight away. It was a huge benefit during our recent USA visit".

Armour says his latest development further demonstrates that Dunedin can foot it with the best when it comes to development of innovative new products – "we love living here and the world's our oyster" says Armour. "Our goal is to grow a global business from our Dunedin base and continue our R&D here." 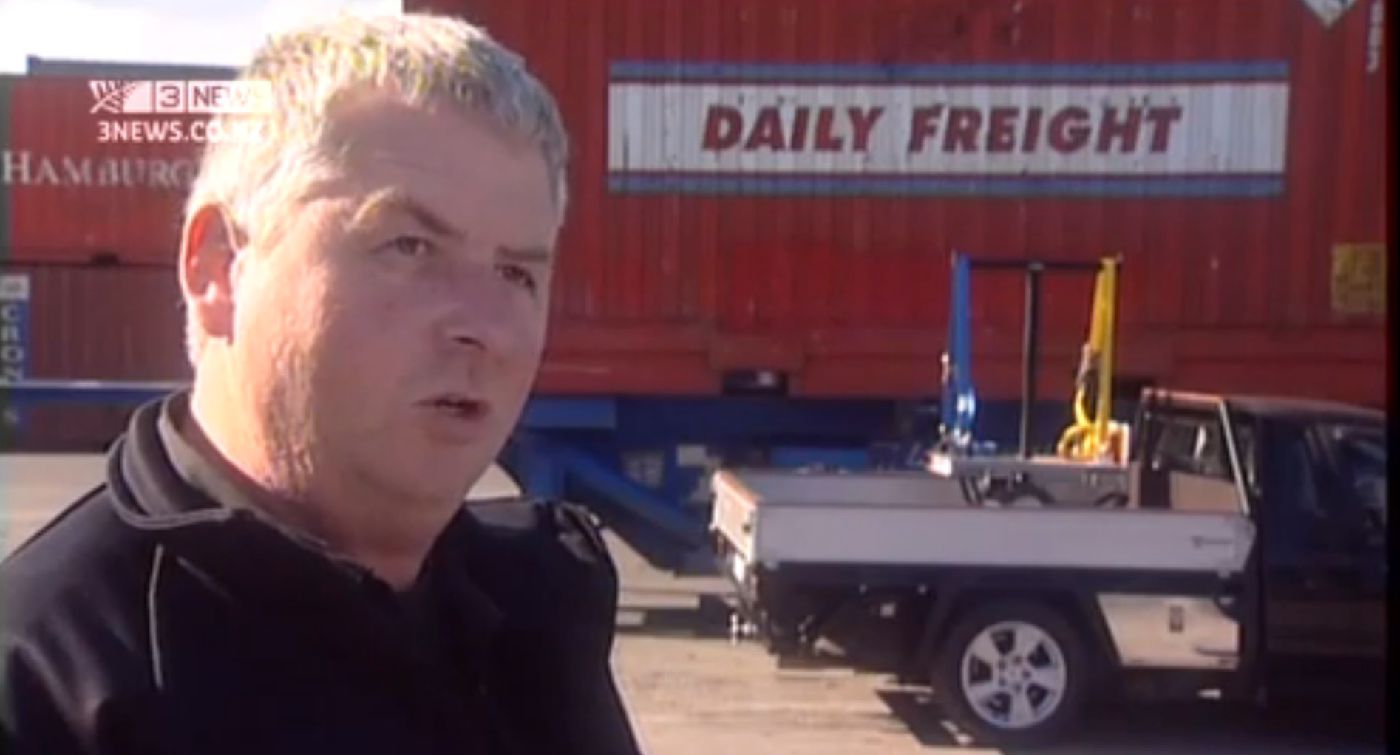 A Dunedin inventor has come up with an innovative device which could solve a worldwide problem for the trucking industry... 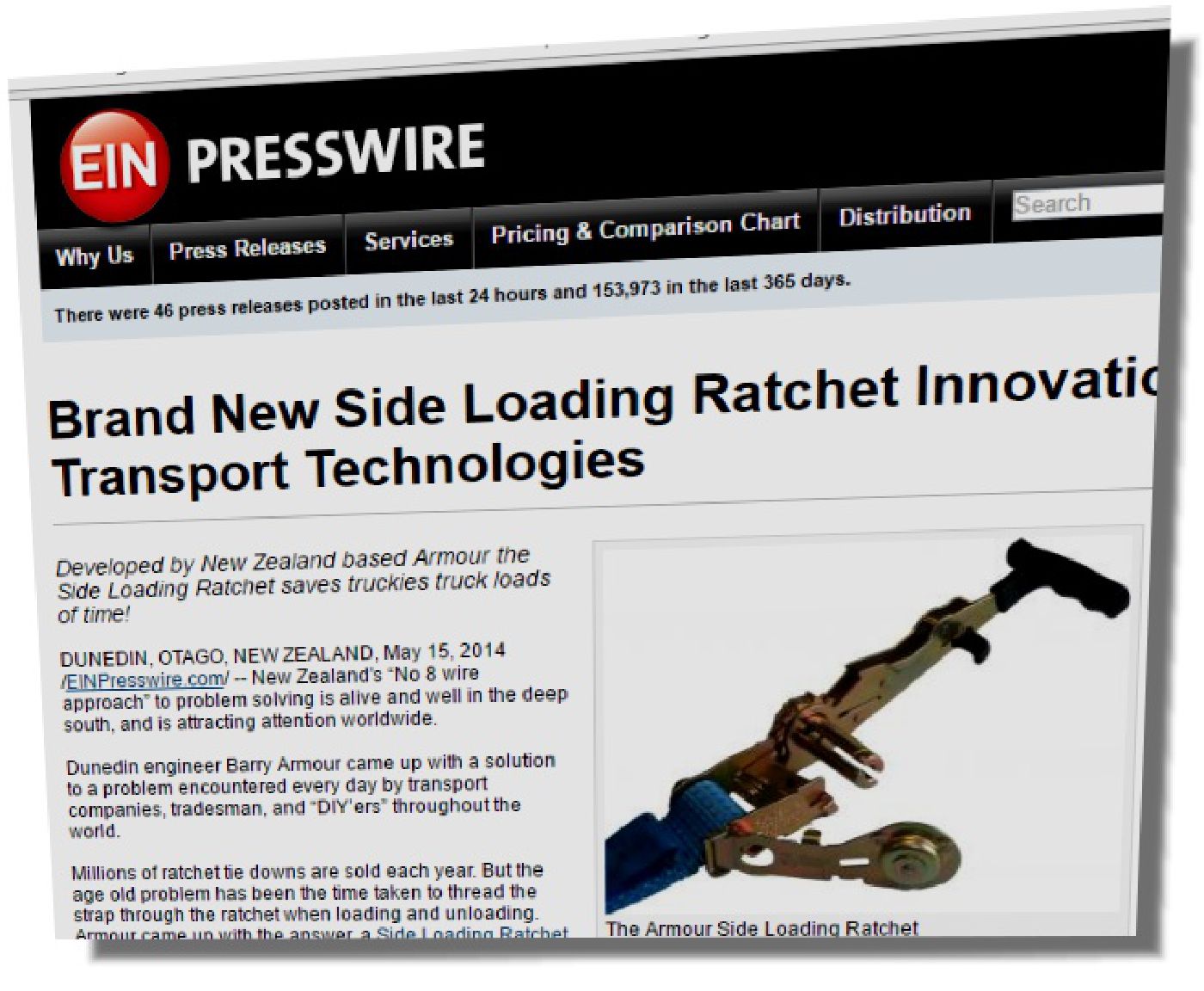